What's in a Name?

The website is up about the Midwest Felting Symposium. I am so excited about this event. I get to see my buddies, see wonderful felts, learn a bunch of new stuff and feel really good about this medium.
While I was waiting for the symposium site to load, I went to Susan's Fiber shop website. There on the page where she shows off her pretty babies, was one named after me! She's too cute, don't ya think? 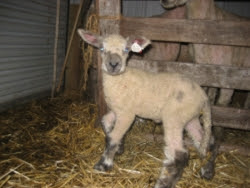 Well, seeing this pretty Teeswater baby being my namesake, I thought I should take another peek at what this name Suzanne means.

In the New Testament this is the name of a woman who ministered to Christ. It also occurs in the Old Testament Apocrypha as the name of a woman falsely accused of adultery. The prophet Daniel clears her name by tricking her accusers, who end up being condemned themselves.
***end of definition***
I wonder which way she'll want it pronounced. She's so cute!

Anyway, check out the website on the symposium. It's just too wonderful to miss!
BTW, did you know that a woman in Michigan can use all of her names, maiden and married?...and it is legal? WOW!
Posted by Hooked On Felt at 2:35 PM